A model rocket simulation spreadsheet
(Don't worry, the thing is in English, despite the Finnish name.)

The table is colour-coded as follows:

The table is divided into sections:

There are currently five types of elements: nose, tube, widen, fins and mass. The first element in the rocket definition must be nose (that's why the cell is white, not gray). The tube elements are assumed to be round and of uniform thickness. Conical sections that join tubes of different thicknesses are always widen-elements (even the ones that narrow the tube). The mass-elements are for defining engines, engine mounts, parachutes, payloads etc which are inside the tube, and do not affect airflow. Any bulging payload compartment must, of course, be defined with tube- and widen-elements. 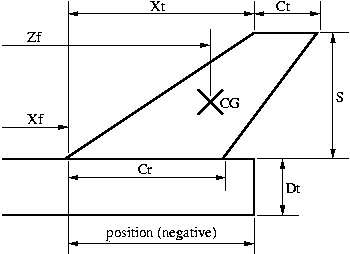 Other parameters in this section are the angle of attack (alpha) and K for Galejs stability calculations [2] and for the projection method, the ratio of total fin area to projected fin area (k).

The center of gravity can be calculated exactly. The center of pressure, on the other hand, is approximated by three methods: Barrowman [1], Galejs [2] and projection. The stability obtained by these three methods is presented both in centimeters (difference between CG and CP) and calibers (multiples of maximum body diameter). Positive is stable, negative unstable.

This is calculated exclusively by the Galejs method, since it is the only one to account for the effect of cross-winds on the body tube [2]. You can enter the desired stability in either cm or calibers (the bigger value will be used). The effect of wind is greatest at take-off when speed is lowest, so this is calculated from enginge thrust and launcher height. Since K depends slightly on the angle of attack, you can change it accordingly, and if you are launching from the Moon, adjust the g-constant as well.

To calculate fins required to obtain a certain stability, do not define any fins in the rocket definition -section (or you can just delete the keyword "fins" and the current fins will be ignored).

In this section, you provide the number of fins n, the diameter of the tube where they are attached (Dt, unlike in rocket definition, this is not inherited from anywhere!), the areal density of the fin material in grams per square centimeter (don't use 0 even for very light material, instead use 0.00001 or such, to avoid a division by zero), and the fin's geometry—these values will be scaled equally up or down, retaining the fin's overall shape. Like above, the required stability can be entered as cm or calibers, the larger of the two will be used. The position of the fins is given in cm from the top of the rocket, measured to the center of gravity of the wings, not their top edge as before!

For Galejs calculations, the alpha and K values entered in the Rocket definition -section will be used.

The projection method has been solved analytically, whereas Barrowman and Galejs approximations are performed in three iterations. The first two results are visible in pale-yellow so you can see if the results are converging correctly. The final dimensions S, Cr, Ct and Xt of the fins are calculated, as well as the position (from the top of the rocket) of the fin's top edge (Xf). Fin areas and their mass contribution to the rocket are also presented.

When the entire rocket (including fins) is defined in the first section, you can enter here the required stability of the rocket (cm or calibers, the larger will be used) and the position (from the top of the rocket) where the mass can be added. The required mass and total rocket mass is calculated based on all three methods.