Change the AUX sends from post-fader to pre-fader

This (much simplified) block diagram shows how the MIX 802, just like the UB502, is wired internally. You can see that the headphone amplifier is controlled by both the Phones fader and the Main fader. The mods I wanted to do are shown in red: Basically bypass the Main fader from the headphone amplifier's input. That would provide two independent volume controls: one for controlling my speakers connected to the MAIN OUT, another one for controlling the headphones. Or, since the "CTRL RM OUT" output is also controlled by the Phones fader, I can independently control the volume of two pairs of speakers as well.

When I modified my Behringer UB502, I found the schematic for the Behringer Xenyx 502 online, and it turned out to be exactly the same with respect to component values and their reference numbers. I couldn't find a schematic for the MIX 802, but I did find the schematic for the Behringer UB802, and it seems functionally almost similar (but not quite, as one has a fader on the AUX SEND, whereas the other has a fader on the stereo AUX RETURN). However, when I opened up my MIX 802, I immediately saw that the components' reference numbers and values have absolutely no correlation with that schematic. Damn.

To open up the mixer, I first opened the four screws on each side and removed the side panels (though this step seems to be unnecessary). Then I opened the six screws from the bottom, and removed the bottom panel. Next I pulled off 27 potentiometer knobs—all except the two GAIN pots. Some were rather tight, but they're just friction fit. Then I took off the retaining nuts and associated washers from all fourteen 6.3 mm TRS jacks and the retaining screws from the XLR connectors (two screws each) and RCA connectors (one screw in the middle). Finally, to release the circuit board, I had to open five screws holding it onto the top part of the chassis. There are threaded stand-offs in between the chassis and the board, so it doesn't matter whether you open them from the top side, or from the circuit board side. I opened them from the circuit board side, all except for one, which was very tight—that one I opened from the top. After this, the PCB came out, and I just had to disconnect the power lead connector before I could stow away the entire chassis. There were also spring-loaded washers around the neck of each TRS connector, but these didn't seem to come off on their own, so I let them be.

When soldering the jumper wires, make sure you don't short-circuit them to any other nearby components or board traces. (That should not be a problem, since they're soldered onto the leads of through-hole components.) Once done, reassemble the mixer and test it. If all has gone well, you can now control the main and tape outputs with the "MAIN" volume control, and the headphone and "CTRL RM" outputs with their own volume control, independently! The "Tape to phones" and "Tape to mix" switches work exactly as before. The level indicator LEDs, however, are now pre-fader, so they keep blinking along with the mixed signal even if the "MAIN" fader is turned down to zero. But blinking LEDs are nice—why should they turn off just because the music is silenced? Ok, maybe they're not useful anymore for adjusting levels when mastering a musical recording, but I'm not using this mixer for mastering anyway.

In order to use a mono channel as an independent mic preamp—without feeding its signal into the main mix—I wanted to make the AUX send pre-fader. That way I could have an effective third output channel, completely independent of the main outputs.

Also, for remote work teleconferencing, I find it unnatural to speak while wearing a full headset or earplugs, as I don't hear my own voice as I do normally (or when using only a one-ear handsfree set). But with a pre-fader AUX, I can now route my microphone audio through the mixer, and take it from the AUX send into the computer (via a suitable attenuator, as it's going into a mic level input). By routing the computer's stereo output also through the mixer into my headset, I can now mix in just a tiny bit of my own microphone audio in order to make speaking more natural. It may not seem like much, but with telco after telco after telco, every single working day, these things begin to matter.

As in the above headphone modification, modifying the mono channel is just a matter of cutting the signal path to the AUX send, and wiring up a new path from a suitable spot before the fader. Only a bit of wire is needed to do that.

The only relevant difference of the stereo channel compared with the mono channels is that left and right are mixed together into a mono signal by a pair of resistors before feeding into the AUX send. Thus you can either isolate both resistors and wire them to suitable spots before the fader, or you can isolate just the AUX send potentiometer, and add two similar resistors when rebuilding the signal path. 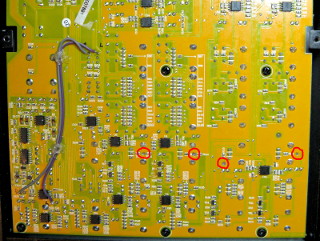 See the full image of the cuts here. The wires you see on the left-hand side of the board are from the headphone volume modification detailed above. This AUX send mod will work with or without the headphone mod. 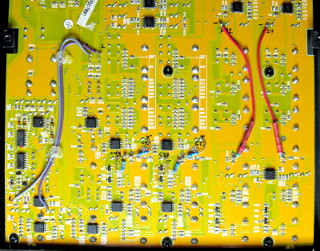 To reconnect the AUX send of Mic Input 1, I would have to solder a wire to R111, which is an SMD resistor. Soldering on the end of an SMD resistor is entirely possible (I did that when modifying my UB502), but it's just a bit tedious. Instead, I took a leaded resistor of the same value (6.8 kΩ) and soldered it directly to the AUX send potentiometer (VR15, center leg), which is a through-hole component, and easier to solder to. I soldered its other end to the negative end of C24, which is also a through-hole component. The resistor was just too short to reach all the way, so I had to extend it with a short piece of wire. I placed heat-shrink tube over the joint to ensure it doesn't short circuit anywhere. To reconnect the AUX send of Mic Input 2, I similarly connected a 6.8 kΩ resistor between the center leg of VR16 and the negative end of C32.

This AUX send modification was very easy to do, as everything was accessible on the back side of the circuit board—no need to remove the board, which involves removing all the potentiometer knobs and connector nuts etc, and then all the reassembly afterwards. Just open the bottom panel for access. Thanks to Tapco's excellent service manual, which showed not just the schematics, but the board layout also, I didn't need to remove the board just to read the component reference designators on the front side!

I modified the AUX sends of all channels of my mixer, because I have absolutely no use for any post-fader AUX sends. However, if you want to modify only selected channels, there's no reason why you couldn't do that.

A word of caution

There's nothing especially difficult about these modifications, but if you do manage to break something regardless, now have a broken mixer, congratulations! So don't attempt this modification unless you know what you are doing and are willing to take that risk, and in any case don't blame me for anything bad that happens!
Antti J. Niskanen <uuki@iki.fi>