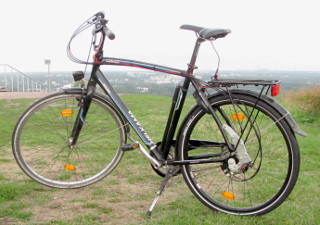 I have a boring, off-the-shelf, "supermarket" Helkama Kulkuri bicycle that originally came with the common Shimano Nexus Inter 7 hub. It's just a bicycle—nothing to customize, nothing to upgrade, no options, nothing. Just a plain old boring bicycle.

Since the bike came with an internal pedal-operated coaster brake in the hub, it has no V-brake or disc brake attachment points!

I have pedalled a lot with the Nexus hub that this bicycle came with (as did the one before it), but after buying the new bicycle (my old one was ancient, rusted, and actually growing algae all over the frame, and needed all kinds of service... but it had the exact same hub) I began wishing for a Rohloff Speedhub, which seems to be considered the Rolls Royce of bicycle gear hubs. It has fourteen equally spaced gears with an overall gear range of more than twice that of the Nexus (526% as opposed to 244%) and is renowned to be high quality and reliable. But the conversion of this Helkama Kulkuri from Shimano Nexus to Rohloff Speedhub turned out to be quite a task!

Here's a brief account of my Speedhub conversion, including

The Speedhub is made in a variety of different configurations, so at least one of them should fit any given bicycle (uhh... keep reading). I chose the Speedhub 500/14 TS DB model, which has mounting points for a brake disc (see the section on brakes), an external gear mechanism (the disc brake option isn't available at all with an internal gear mech, but the external gear mech also makes cable replacement much easier), and no quick-release (a quick-release would only make stealing it easier). The final options were color (I chose silver, so it won't stand out from the multitude of Shimanos as anything worth stealing; black and red are also available for those who want to stand out) and number of spokes (I chose 36 spokes, which is the same I had on the Nexus as well as my front wheel; 32 is also available).

My rear wheel was built by Siegfried from Bike Station, comprising the following parts:

This model of Speedhub comes with a "Long torque arm" which attaches to the bicycle frame (usually the chain stay) to transfer torque. I made my own torque arm instead, because that seemed to be the easiest way to attach a disc brake caliper. Believe it or not, my bicycle frame has no attachment points for any kind of rear brake! (See the section on brakes.)

Rohloff recommends a 3/32" 8-speed chain for the Speedhub. However, a 1/8" 1-speed chain can be used just as well, if a chain tensioner is not being used. Since my bicycle has generously sized horizontal dropouts for adjusting chain tension (after all, it was designed for internally geared hubs), I did not need or want the silly tensioner. And since the Nexus hub has a 1/8" sprocket, and the bike similarly has a 1/8" chainring, I could have kept the original chainring and used a 1/8" chain.

After much deliberation, however, I decided to get my chainring replaced with a larger one. I could have gotten a very reasonable range of gears even with my original chainring, but that would have required the very smallest available sprocket with 13 teeth. No further adjustment to the gear range would have been possible (as there are no smaller sprockets for the Speedhub). So I decided instead to stick with the standard 16 tooth sprocket and have the chainring exchanged for a larger one. This also let me specify the correct chainline for the new hub, as well as switch to the preferred chain size. (Also, a nearby bike workshop charged next to nothing for exchanging a good condition second-hand crankset from a scrapped mountain bike. I'm using only the largest chainring, but saw no reason to remove the two smaller ones.)

With a 48 tooth chainring and the standard 16 tooth sprocket, I get two gears that are higher than the high gear of my old Nexus, and all of four gears that are lower than my old low gear. That seemed like a good combination to start with, let's see what it feels like in practice.

If only Rohloff made the Speedhub with an internal coaster brake! Then it would be a true drop-in replacement for other internal gear hubs, such as the Nexus. But noooooo, the Speedhub has no coaster brake. I don't know if it's technically infeasible, or if they're just targetting the derailleur gear crowd, who never had coaster brakes in the first place. They make a lot of points why hand-operated brakes are considered "better" than a pedal-operated coaster brake, but in the end it's a matter of preference—and I would have preferred a coaster brake. Hello Rohloff, any chance of getting a coaster brake version of the Speedhub??? Please??? Pretty please???

So I had to convert the rear brake as well, which turned out to be the bigger issue in this whole conversion. Now, I would have thought modern manufacturing would prefer generic fit-everything parts e.g. bicycle frames that would have fittings for V-brakes and/or disc brakes even when sold with coaster brakes as standard, but noooooo. There's a V-brake in the front fork, but there's no fittings for rear wheel V-brakes! Honestly! The bike frame is so optimized around the Shimano Nexus and its internal coaster brake, that there are no rear V-brake fittings!!! What to do...

The custom adapter would essentially replace the original "Long torque arm" of the Speedhub. Like the torque arm, it would be attached to the hub's axle plate and to the bicycle frame, but it would also provide IS standard mounting holes for a brake caliper. When moving the wheel forward or back to adjust chain tension, the adapter would move as well, thus keeping the brake disc and caliper properly aligned together. To start the design, I made a rudimentary CAD model of my bike's rear dropout (green), as well as the axle plate (light gray) and IS adapter (dark gray). The model is hardly accurate, but close enough to test positioning the IS adapter relative to the axle (the standard specifies the distances from the axle to both IS holes) in various orientations. As it turns out, the two best options had to be scrapped: 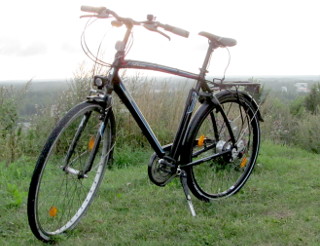 My first impressions of the Rohloff Speedhub are very positive. The shifter is just a tad stiffer than in the Nexus, but it is absolutely precise due to the two-cable shifting system, and indexing happening in the hub. The gear range is fantastic with the 16 tooth sprocket and 48 tooth chainring, giving me the higher gears I sometimes wanted and several gears lower than what I had in the Nexus. And there's none of the dings and bangs of the Nexus in any gears or while shifting. I'm not saying the Nexus is bad—I've rode them great distances with minimal maintenance—but they do feel kind of cheap because, well, they are cheap. As an example, both Nexuses I've used featured an often-recurring bang shortly after shifting downwards from 6th gear to 5th and then applying some force. It was harmless, but always gave me a fright. The freewheeling noises of the Speedhub, however, are significantly louder than in the Nexus, but not really disturbing. I've heard louder (and more disturbing) noises from some derailleurs! There's also a distinct "grinding" noise in the lower seven gears, which the Handbook acknowledges as normal, and promises will go away within 1000 km of use. I've hardly put 500 km on the hub yet, and it's already becoming quieter. (My Nexus had a similar "grinding" noise in first gear, and I swear, that was only getting louder with use!)

My makeshift disc brake attachment also works like a charm, ugly though as it is. The brake works reliably, the torque arm stays in place, there's no wobble or backlash... It just works. This was my biggest concern in the whole project, since brakes are kind of important in a bike. The Avid BB7 MTB brake caliper sits firmly in place and does its job well. However, I do still miss having a pedal-operated coaster brake. Hello Rohloff, any chance of getting a coaster brake version of the Speedhub??? But no way am I switching back to Shimano Nexus regardless! Bicycling is fun again!

One old Shimano influence still remains in my bike: Since I was used to the way the Nexus grip shifter works (turn the grip toward myself for higher gear, away from myself for lower), I intentionally crossed the shifter cables of the Speedhub. Otherwise the Speedhub would work in exactly the opposite direction I was used to. However, now the numbered dial on the shifter is reversed—"14" is now the low gear and "1" is the highest. While riding, I have no idea which gear I'm in! But I seldom care.

The conversion was a real pain, however. I really cannot recommend trying to fit a Speedhub onto a bike without rear brake attachment points! If you have one of those, do yourself a favor, pick up an old derailleur bike frame and use that instead! But as long as the frame does have fittings for rear rim brakes or a disc brake, then everything should be a breeze! (Alternately, if Rohloff were to make a coaster-brake version of the Speedhub —Hello Rohloff???—, that would be a direct drop-in replacement for a Nexus in all scenarios. Is there really no market for that?)

If you do want to do something stupid like me, out of sheer bloodymindedness, it's not impossible to fit a Speedhub and a disc brake to a frame with no rear brake attachments points. You won't even need a huge variety of tools—I had only a hand-held drill and a jigsaw, plus the usual files and screwdrivers etc. I wish I had a milling machine, or at least a drill press. That would have made everything infinitely easier. But I did end up with the world's finest gearbox in the world's most boring bicycle (which no-one will want to steal, I hope), just the way I like it!