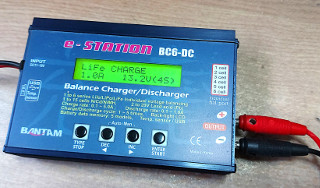 TL;DR?  It's built like this. But read on for details.

I use a Bantam e-Station BC6-DC to charge various battery packs, including the low self-discharge NiMH pack I use with my FT-897d when operating portable, the internal LiPo batteries I used in the same radio earlier, my bicycle headlight battery, as well as the occasional other battery pack.

When charging individual cells, everything is simple. But when charging multi-cell lithium packs, it's good practice to balance the cells at least now and then. Otherwise a single cell that self-discharges a bit faster than the others will lower the overall voltage of the pack, and the charger will not cut off until the other cells are already in an overcharged state. Or if a single cell begins to degrade and loses some capacity, it will reach full charge before all the other cells, and will become overcharged, likely degrading it even more. Many battery packs contain a balancer circuit (and other protection) built in, but e.g. RC hobby LiPo packs most often don't. Instead, they have a balancer connector that allows compatible chargers to do the balancing.

The BC-6DC has a balancer connector, but to actually connect a battery pack's balancer connector to it, requires a small adapter board, which is not included with the charger for some weird reason (or have I just lost mine, I don't know). But the adapter is easy to make. The connections are adequately explained on page 10 of the manual, with examples shown of a 6-cell pack and a 3-cell pack. It is also possible to connect two 3-cell packs or up to three 2-cell packs in series, and charge them at the same time by using the balancer function, as explained on page 21 of the manual. This requires a special "Multi-adaptor" board (which is definitely not included with the charger), whose connections are not explicitly explained, but which are quite obvious.

To use the adapter, just follow the manual: plug in the battery pack's balancer connector to the board, plug in the board into the BC6-DC, connect the main charging leads, and select the "BALANCE" function and correct cell type and parameters. Only connect a single pack at a time, and for 2 or 3-cell packs, use the connector nearest the black wires' edge of the board, unless you're using the "Multi-adaptor" functionality. If you are using that, only connect identical battery packs which are approximately in the same state of charge. You'll also need suitable wires to connect those packs in series, but I leave that one up to you. I don't think I'll ever need that functionality, but I built it into my adapter board just in case.

Do read the manual fully, be aware of the hazards of lithium batteries, always verify you've selected the correct battery chemistry and charge current, and never charge any batteries unattended. And don't blame me if you do something stupid or if something else goes wrong! You have been warned.