Canon PowerShot A720 IS

That's one tough camera for hiking! 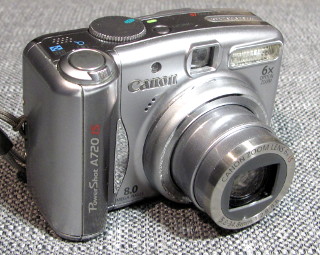 I like taking pictures, but I mostly use a bulky DSLR for that (a Canon EOS 1Ds Mark-II primarily). I also like hiking in Lapland, often for extended periods up to six weeks, and my backpack is heavy... So in 2010 I bought a used Canon PowerShot A720 IS to take photos when hiking. Oh boy, did I get my money's worth! When choosing this camera, my criteria were:

Why AA batteries? Because I mostly do not use this point-and-shoot camera for anything else—only hiking, once or twice a year. Such infrequent use is really bad for the well-being of proprietary lithium battery packs, but on the rare occasions when I do use the camera, I need several spare batteries as well (because I use it for several weeks without a chance to recharge). Low self-discharge NiMH AA cells are what fits the bill—they're cheap, well behaved, and find loads of other use as well. I have found Sanyo/Panasonic 2000 mAh Eneloops to be very good for all purposes. I have no experience of higher-capacity later-generation Eneloops, because these old ones just refuse to die!  :)

The A720 IS was introduced around 2007, so it's definitely not a hot new product. It has "only" 8.0 megapixels and a "modest" 6× optical zoom, and the sensor goes to "just" ISO 1600, with ISO 400 being all-around usable. But it does have lens-shift image stabilization and good manual adjustments i.e. it has P, Tv, Av and M modes, +/− 2 EV exposure compensation in 1/3 stop increments, flash with fully manual control (though not very fine-grained) and even 2nd curtain sync. Still, it's not trying to be a professional camera, or an especially rugged one either—it's just a plain, plasticky point-and-shoot. But man, oh man, has it ever stood up to use! It has survived my 2010, 2012, 2013, 2014, 2015, 2017, 2018, 2019 and 2020 summer hikes, totaling some 28 weeks out there in the wild, plus several shorter excursions, including some in winter. This camera has been through hell, as far as cheap plasticky consumer electronics are concerned! Along the way it has seen all kinds of use and abuse, absolutely stupid weather, rain, and dampness in general for prolonged periods—things I would never have expected any compact camera to take! In fact, light snowfall killed the battery grip on my EOS 5D DSLR before I obtained my A720 IS! So this is one tough, tough camera!!!

Not that the A720 IS was perfect, mind you. Like many PowerShots, it does have a tendency to complain of depleted batteries, even when they are freshly charged, as your favorite search engine can confirm. The "toothpick fix" did nothing for my camera. I know there are instances where the solder joints of the battery contacts to the main circuit board have broken, causing these symptoms. But in my own experience, this problem mostly happens: I don't know whether similar issues crop up with the SX120 IS. I doubt I'll be using that camera enough to find out, because of its aversion to rain.
Antti J. Niskanen <uuki@iki.fi>