YES, YOU *CAN* DISABLE THE ALARM-FUNCTION ON THIS RADIO!!!
See the modification below.

The Baofeng 2 m/70 cm dualband radios UV-5R and the smaller UV-3R are extremely popular in Finland, quite likely everywhere else too. As I write this, the UV-3R is selling as "UV-3R Mark-II" and "UV-3R Plus+" versions. The same model is occasionally seen under other brand names also. They are all pretty similar—the Plus+ is ever so slightly clunkier than the Mark-II, and has desktop charger contacts on the battery lid, whereas the Mark-II has a charging port on its side. They are all available in a variety of loud colors in addition to traditional black. I bought my UV-3R solely because it is so cute and tiny, and I love using it.

Incidentally, the battery icon on the UV-3R is much better than on the Wouxun, which displays full bars almost all the time, and then goes from three bars to two to one and to zero in quick succession when the battery is almost dead. On the UV-3R, the indicator is quite reliable and useful: From full charge (4.1 V) it displays three bars, dropping to two at 3.8 V, then one at 3.5 V and finally zero at 3.2 V. On transmit, the radio will begin beeping empty before zero bars, but still gives many minutes of TX time even with a one bar indication. Also, like on the Wouxun, battery voltage is displayed on power-up. And the battery life on the UV-3R is really very good.

Once charged, I plugged the radio into my spectrum analyzer and measured the following 2nd harmonic levels at VHF (relative to the carrier). I measured at both HIGH and LOW power. (I couldn't measure actual output power, since my analyzer isn't calibrated, and I ran out of attenuators and thus couldn't use my milliwatt RF power meter either.)

That's not too bad. Certainly nothing like the -20 dBc harmonics that were typical of the earlier version of the UV-3R. At higher power, the harmonic suppression seems to improve further with increasing frequency, but WTF happens at low power??? At 160 and 170 MHz, not only does the harmonic suppression get worse, but the absolute power of the 2nd harmonic actually increased by some 20 dB when power was decreased!!! Oh well, as long as the ham band is well-behaved. I also checked harmonics at 70 cm. No surprises there.

Since I was going inside the radio anyway, I did perform the LPF mod also. Harmonic suppression improved by a further 5 dB on 2 m (high power), as seen in the above table. No effect on 70 cm.

In order not to accidentally transmit out of band, I set the frequency limits using the UV-3R software (version 1.11) available here. Apparently it installs and runs just fine under Wine in Linux, so you don't need that piece of shit by Microsoft. Also, Linux fully supports the Prolific chips used in the cheap USB programming cables you get from eBay, which Windows users are always having trouble with. Once you've set the band limits, you can switch back to using CHIRP. To get 144–146 MHz VHF and 432–438 MHz UHF (which are the allowed frequency limits in Finland), use a data line of "4014601420438043" in the .ini-file of the UV-3R software, as per the explanation here. To make Wine see the programming cable (which appears as a standard USB serial port), see AA-1000 firmware update. 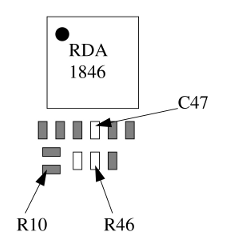 While I was inside the radio, I did the other usual modifications:

In earlier versions of the UV-3R, RX audio was supposedly extremely loud. I didn't think it was terribly loud on my Mark-II, but the key beeps were. After weighing the different alternatives, I settled on the DD5XL audio modification (see page 19). If you want to do the same, the diagram on the right will help you identify the relevant components in relation to the RDA 1846 chip. The gray rectangles are populated 0402 SMD components, the white ones are unpopulated. In summary, R10 is exchanged for 680k, 100 nF is installed at C47, and 220k is installed at R46. I highly recommend this modification, because 0402 SMD-components and such great fun to work with.  :)  I had no trouble soldering these by hand under my microscope.

To improve RF immunity with the headset or earphone, I added a 1 nF cap across the external PTT input. I used a 1206 SMD chip, and placed it right at the connector.

Another major modification that I performed was to glue a thin sliver of open-cell polyester foam inside the battery compartment lid. This cuts down vibration induced in the lid at loud volume.  :)

And, of course, I did the following to disable the alarm function:

How to disable the Alarm function on the UV-3R

This is why I began crawling inside the radio in the first place. One of the most annoying things in this radio is the "Alarm" function, which raises hell on both AF and RF (yes, it actually transmits that alarm sound, on the air!), and which is activated by pressing and holding the button right next to the PTT. Stupid or what? Well, it can be disabled, but the fix is not as simple as changing a menu setting (like on the UV-5R), doing a software mod via the programming cable, or removing a single resistor... But expensive it is not either.

It could of course be disabled simply by disconnecting the button, but the same button is also the "Alternate function" or "F" button needed for memory programming, scanning etc. What needs to be disabled is pressing-and-holding it. First I considered something simple based on an RC-network and a transistor or two, but that would just not work: Looking at the schematic, all the keys are wired to a single pin on the radio's microprocessor, through different valued resistors. Apparently the microprocessor measures the voltage to figure which key was pressed. An extra RC-network would certainly mess things up.

Of course, I take no responsibility for any damage that this or any other modification may cause to your radio, your soldering iron, your fingers, your cat, or anything else. Do this at your own risk. Or better yet, don't do it. (But please don't annoy people on the repeater with that horrid alarm sound either.) Do let me know how it turns out, though, if you try this modification or something similar.